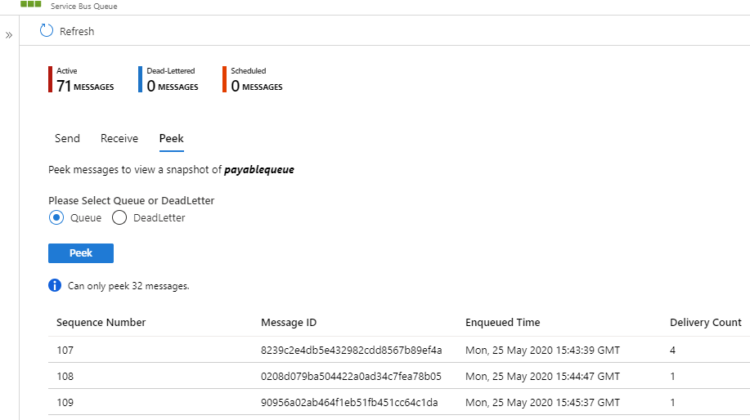 The announcement at Build 2020 that there is finally a Service Bus Explorer in the Azure Portal prompted me to write a post about using a Service Bus Queue with Power Automate.

What are Message Queues?

Messages queues are used to build scalable integration between platforms where a sender application puts messages on a queue and a receiver application reads the messages from the queue. The sender and receiver are “decoupled” in that the availability and speed of either application does not impact the other. The sender can create 000’s of messages on a queue and the receiver can process them as and when it is ready to process. This makes message queues highly scalable. In the past queues could only have been utilized by developers using code however they can be used from Power Automate without writing any code. In this example, I am creating a Power Automate Flow to read Json messages from a queue which then calls a UI Flow to complete an RPA task that creates a ledger entry on an accounting system. It need to operate like this as this is an attended UI Flow and the user needs to log on the accounting system first for it run.

Queues are created from the Azure portal by first creating a service bus namespace and then adding a queue to the namespace.

The Power Automate Flow to carry this out is pretty straight forward. The trigger is when a message is received on the queue. The message is read in peek-lock mode meaning it remains locked on the queue until it is either completed or removed. This is good practice when reading messages from queues in case anything goes wrong when processing the message. The alternative is a destructive read which deletes the message from the queue as soon as it has been read.

There are two actions in this scope. The first parses the received messages which is a Base64 encoded Json object using expression @base64ToString(triggerBody()?[‘ContentData’]) The schema was generated based on the sample { “ponumber” : “AB13219”, “description”: “materials”, “amount” : “123.45” }

The second action calls the UI Flow I created in my post https://joegill.com/rpa-power-automate-ui-flows passing in the values from the received Json message as parameters

The second action call the UI Flow I created in my post https://joegill.com/rpa-power-automate-ui-flows