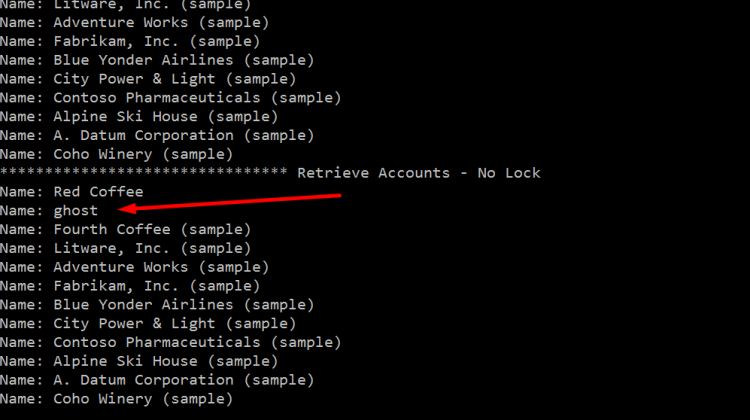 Using NoLock can provide a performance boast to your CRM code when querying data.  When you use NoLock the sql generated sets the transaction isolation level to  READ UNCOMMITTED. What this means is that your query does not issue any shared locks. Shared locks prevents the data you have read being modified. As a consequence of this it may possible for your query to return “dirty reads”.


Dirty reads are where you read data that has been modified but not committed by another transaction. To demonstrate returning “dirty reads”  when using NoLock I did the following.  I created a plugin that triggers on the account create post operation event. The plugin sleeps for a minute if the account name contains the word ghost. This will stop the transaction from committing the database insert until the sleep has completed.
if(entity.LogicalName == “account”)

From Dynamics CRM I then created a new account with the name ghost and the UI froze while the plugin executed. Meanwhile I ran the following code which executes a QueryExpression against the account entity. It then sets QueryExpression NoLock attribute to true and executes the query again.

As you can see from the results the second set of records includes details on the ghost account even though UI is still frozen and the database transaction has not been committed yet.

You can need to consider carefully if you should use NoLock in your environment and dirty reads may not be a problem if you seldom have transaction rollbacks. Alternatively you made decide to use it in specific queries where the data changes infrequently.