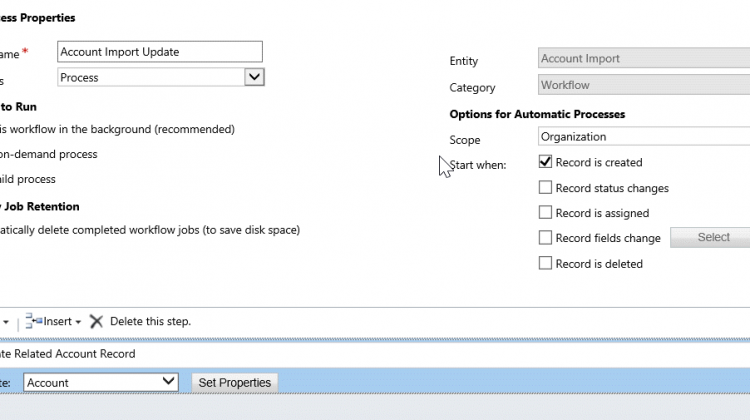 The out of the box data import In Dynamics 365 does not support updating records unless you do an export to Excel and and then re import it.  This does not work where you are given a CSV file and need to use that to update records in Dynamics. Here is a quick NoCode way to do a data import and update records in Dynamics.
What you need to do is to create an import entity that contains the fields you want update. You then create a relationship between your import entity and your target entity.  Then create a workflow that triggers on the creation of the import records to update the related record. Import the records into the import entity and in the import mapping do a lookup to the target entity based on the unique identifier .
Here is a example using the account entity and I have a CSV file with the account numbers and address changes I need to import and update in Dynamics.
Name,AcccountNo,AddressLine1,AddressLine2
Dui Cras Pellentesque Foundation,1667042965499,567 Euismod Rd.,Mansfield-et-Pontefract
Lacinia Mattis LLP,1648061744999,107-5272 Tellus Rd.,Millet
Pede Nunc Limited,1692090720199,882-8106 Sed St.,Viernheim
Pede Associates,1606111660499,5216 Mauris Avenue,Neumünster
The first step is to create an import entity called Account Import and create a relationship between it and the account entity.

Then create a workflow that triggers when an Account Import record gets created which updates the related account record.

Yon can now go ahead and import the data from the CSV file.  The important step when you create your import mapping is to populate the account lookup field by setting the referred field which in this example is the account number.

When you run the import the workflow fires for each imported record and updates the related account record.